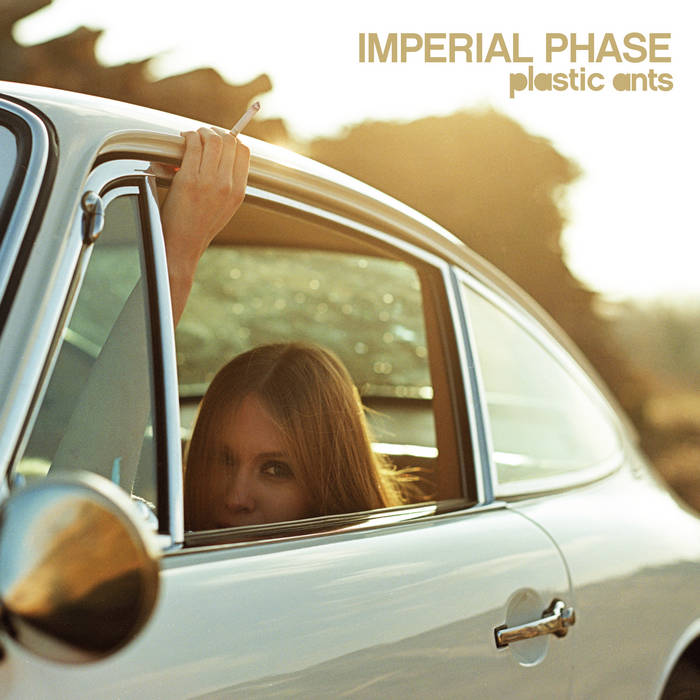 It could have been a book of short stories. Or a mixed-media art installation, or even some new architectural marvel.

It is, after all, an album titled Imperial Phase, and it evokes—and then necessarily chops to pieces—all the desire, over-reach, and moral obscenity that such an expression implies. The phrase itself, repeated in the titular song by Plastic Ants’ singer-songwriter Robert Cherry, originated with another urbane, media-smart singer-songwriter, the Pet Shop Boys’ Neil Tennant, and it’s pure cheek, as it absolutely must be. It initially conjures those can-do-no-wrong, insouciant chapters in the stories of many an ascendant entertainment career—that moment of perfect platinum power, or in this case, gold (a color mentioned five times on the record). It’s when things get exquisitely, breathlessly, insufferably stratospheric.

We all know what happens next, and it ain’t pretty.

But it was, for a time. Golds, greens, and sandy hills-of-Hollywood tonalities gild this album from top to bottom. Yet these deeply engrossing pop songs also, cannily, throw gobs of shade right back at it all, often drawing an astute connection between the entertainment and empire-building industries and their self-immolating tendencies, and doing so in croons. The result brings to my mind the handsome tension of, say, Bryan Ferry in a punch-up with Paul Weller—think suave with a few bruises and a lot more teeth.

But there is also an even deeper level the songs and their interconnecting stories augur, for the Plastic Ants’ take on “imperial” ephemerality is surprisingly and passionately personal. Celebrity culture is used, ingeniously, as a kind of mise en scène through which a set of contemporary characters move. Instead of prisoners in Plato’s Cave, staring at shadows from light projected behind them, they’re numbly tapping Angry Birds on a private jet ride to Malibu, while their actual lives fall apart.

In this, Imperial Phase could not be more of our time. It poses crucial, timely questions. Do people in today’s Instagrammed and Facebooked relationships imitate the lives of Hollywood celebrities, or do the stars pretend they are just like us—lost, hopeful, and playing a game in codes they don’t understand. It’s the kind of “reality” versus “appearances” paradox this album repeatedly seems to ask. The answer, for Plastic Ants, is always both—and neither.

That Plastic Ants have chosen pop songs as the vehicle to communicate a new, broad-spectrum artwork ends up seeming both incidental and inevitably perfect. Yes, these are gorgeous songs, songs of an almost shameless enormity—each feels, in its own way, as big and dangerously glorious as a setting California sun—but they speak a multimodal artistic language so fluently, you get snagged on several levels at once.

There are not only clever but meaningful literary nods to S.E. Hinton, to Wordsworth, to children’s bedtime books. And then there are the devilishly calibrated visuals—the website, the album art, the videos, the Vincent Perraud photography. A whole very distinct and mesmerizing story pours through all this, threaded with imagery that both mourns and pokes fun at past golden eras of marketing, and especially the late ’60s and early ’70s, when many of the band members—Cherry, bassist-producer John Curley, drummer Joe Klug, and keyboardist-singer Guy Vanasse—were born.

The desolation of scripted marketing and the fame game are not only topical foci here, they’re themes and subtexts, and they come in for heavy scrutiny. At times, the characters work against the flow of tinsel-town cliché with great, if brittle, courage: “She don’t wait for permission/She makes up her own games/From a town with so little vision, baby/She ripped the script to pieces and tore away” (“A Sea of Upturned Faces”). At other moments, we dig deep into the narcissistic assholedom and degeneracy of relationship “acting”: “Destiny No Longer Waits” returns to the gaming motif, with Cherry singing about someone who lives “life like it’s a video game/And the love you only simulate/Leaves her wanting more.”

Ironically, the fingerprints of Cherry’s other professional careers—he’s a longtime music magazine editor (also like Tennant) turned successful creative director—seem to be all over his handiwork here, and it’s, well, complicated. One past video promo on the Plastic Ants’ website features an Edie-cool model who plays an Air France flight attendant returning home, tired, to her icy-hip, lonesome apartment, click-clacking up cold stairs in black heels and pulling out a presumably rejuvenating vinyl Plastic Ants record. That character was a kind of tribute to and critique of a bygone ad-world chic.

On Imperial Phase, a similar but changed figure (who’s a little more Cheryl Tiegs/Jerry Hall than Sedgwick) of a young woman appears. The ’60s feel quite over here, and Edie has OD’d. This young person is all West Coast success and arrival, with rippling gold hills in the distance. With her shoes left behind in the dust, she gazes out a white, ’70s-vintage Porsche (not hers, we sense) that’s perhaps a bit better preserved than her own dreams, which look both achieved and, suddenly, rather worthless. She seems both freed and trapped: “Surfing the zeitgeist was quite nice there up on the wave,” sings Cherry on the title song. “But you had to know, it had to break.” Break indeed—like Pacific waves against Venice Beach, like the ’60s good vibrations against the hard jetties of post-Nam, post-Kent State, post-Jimi-and-Janice. Imperial Phase is there, at that moment, to record, write, sing, and visualize all the pieces, and to figure out what happens next.

Personally, I hate the term “chamber pop,” a term used to describe the band’s debut album, Falling To Rise. It’s so small, so orderly, so “chambery,” after all. If these are chambers, they come with unfolding, Christopher Nolan walls. They embrace real risks: “He stepped from the wreckage of her first attack,” sings Cherry on “The Girl Who Stole The World,” with whispers of Bowie in that Faustian title. “Now what would he give to get that moment back.”

What does come next? That’s what every listener can feel good about. “Light” is a word mentioned eight times on Imperial Phase, but the noun mentioned more than any other word, tellingly, magnificently, is “love.”

When Love comes into this world, it’s inescapable, and it hits hard. In one of the record’s most memorable, instantly hummable songs, “You Will Know Love,” Cherry simply offers no alternative: “You will know love… Like a hammer to your skull.”

In the end, those souls forlorned and lost in the Pacific are brought back to shore—sadder, wiser, but stronger, too. Our woman in the 911 ditches the narcissist asshole she’s been dating, and steals the car: “No one’s princess doesn’t need no prince kiss/’Cause she already stole his whole world.”

And his Porsche. And our hearts.

Imperial Phase may have that effect on you, too. It is, in many ways, a masterful narrative about surviving all “imperial” moments in today’s world, and moving towards what is deeper, richer, and more enduring than even, well, gold.

Bill Broun’s first novel, Night of the Animals, is out now on Ecco Books/Harper Collins. Discover more about the author at BillBroun.com

Produced and arranged by PLASTIC ANTS

Mastered by DAVE DAVIS at THE ALL NIGHT PARTY Cincinnati, Ohio

Dedicated to the enduring creative spirit of BILL CHERRY

Inflight entertainment by singer-guitarist-songwriter Robert Cherry, bassist-producer John Curley, keyboardist-singer- songwriter Guy Vanasse, drummer-singer Joe Klug, guitarist Robbie Reider and cellist Shira Beder. In a world carved out by Plastic Ants you're only as tall as the height of your hopes. And things, well, they're looking up. ... more

Bandcamp Daily  your guide to the world of Bandcamp

Cannibal Corpse's George "Corpsegrinder" Fisher stops by for an interview